Last week the Connecticut legislature agreed on a budget for fiscal year 2016 that includes loophole-closing provisions designed to make sure that profitable multi-state corporations will pay their fair share of the corporate income tax. Since then, a few big corporations including General Electric have launched a lobbying blitz designed to reverse these changes. But as this CTJ report shows, GE has been astonishingly successful in reducing or even zeroing out their state income taxes nationwide. 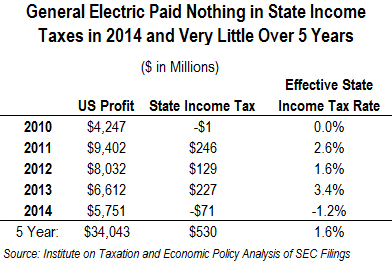 Each year, General Electric publishes basic data on its nationwide state (and federal) income tax liabilities in its annual financial report, as required by the Securities and Exchange Commission. These reports show that the company routinely pays little or no state income tax on billions of dollars in profit nationwide: