Read the PDF (Contains Appendix with Numbers for all 290 Companies)

Among the Fortune 500 corporations, 290 have revealed that they, collectively, held nearly $1.6 trillion in profits outside the United States at the end of 2011. This is one indication of how much they might benefit from a so-called “territorial” tax system, which would permanently exempt these offshore profits from U.S. taxes.

Just 20 of the corporations — including household names like GE, Microsoft, Apple, IBM, Coca-Cola and Goldman Sachs — held $794 billion offshore, half of the total. The data are compiled from figures buried deep in the footnotes of the “10-K” financial reports filed by the companies annually with the Securities and Exchange Commission.

The appendix includes the full list of 290 corporations and the size of their offshore profits in each of the last three years, as well as the state in which their headquarters is located.

There is strong evidence that corporate profits are taxed less in the U.S. than they are in most other countries. CTJ’s major 2011 report on the Fortune 500 corporations that were consistently profitable from 2008 through 2010 found that two-thirds of those with significant foreign profits actually paid higher taxes in the foreign countries where they operated than they paid in the U.S.1 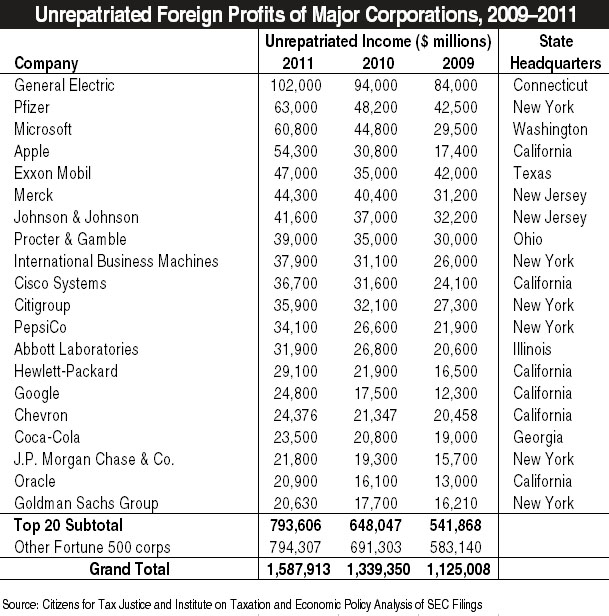 These countries have no corporate tax at all (or an extremely low one) and have thus earned the title of “offshore tax havens.” U.S. corporations engage in convoluted transactions to make what are truly U.S. profits appear to be profits generated by a subsidiary corporation in one of these tax havens, so that they can indefinitely defer U.S. taxes and not pay foreign taxes either. In many cases the transaction only exists on paper and the subsidiary corporation is
little more than a post office box in the Cayman Islands or Bermuda or some other tax haven.

For many U.S. corporations, the majority of “offshore” profits are really U.S. profits that have been shifted to offshore tax havens in this manner. Most corporations provide very little detail that would indicate whether their offshore profits result from real business operations abroad or from shifting profits (on paper) to tax havens. But, as explained in a previous CTJ report, 47 of the corporations revealed how much they had paid in foreign taxes on their offshore profits, and ten corporations, representing over a sixth of the $1.6 trillion in unrepatriated profits, revealed that they paid practically nothing in taxes to any government on their offshore hoards.2 This, of course, reasonably leads to the conclusion that the profits are stashed in a country with no (or an extremely low) corporate income tax (in other words, an offshore tax haven).

The problem of offshore tax havens cannot be solved by lowering the U.S.’s statutory corporate income tax rate (or even its effective corporate income tax rate). Corporate lobbyists claim that the U.S.’s relatively high tax rate is what drives companies to shift profits offshore and that lowering our rate is the answer. The reality is that reducing the U.S. rate is futile because it will never be as low as the rate of most tax havens (which is zero percent).

Nor can this problem be solved by adopting a “territorial” tax system. In fact, a territorial tax system would increase the incentives for abuse. If allowing deferral of U.S. taxes on foreign profits has already encouraged U.S. multinational corporations to shift profits offshore, then eliminating U.S. taxes on foreign profits would logically increase that incentive.3

The real solution is to eliminate the existing tax incentives to shift profits into tax havens — by repealing deferral.4 U.S. corporations would continue to receive a credit for any foreign taxes they pay, to ensure against double-taxation. But there would no longer be any tax incentive for U.S. corporations to shift profits to a country with a lower tax rate, because the IRS would simply require them to pay the difference between the U.S. tax rate and the foreign country’s tax rate (assuming the latter is lower).

In other words, a U.S. corporation would not benefit from pretending that most of its profits are earned by a post office box in the Cayman Islands.

3- For a fact sheet explaining these issues, see Citizens for Tax Justice, “Why Congress Should Reject A ‘Territorial’ System and a ‘Repatriation’ Amnesty: Both Proposals Would Remove Taxes on Corporations’ Offshore Profits,” October 19, 2011. https://ctj.sfo2.digitaloceanspaces.com/pdf/corporateinternationalfactsheet.pdf For a report with more detail, see Citizens for Tax Justice, “Congress Should End ‘Deferral’ Rather than Adopt a ‘Territorial’ Tax System,” March 23, 2011. https://ctj.sfo2.digitaloceanspaces.com/pdf/internationalcorptax2011.pdf

4- A bill before Congress that would repeal deferral is the Bipartisan Tax Fairness and Simplification Act of 2011, sponsored by Senators Ron Wyden (D-OR) and Dan Coats (R-IN). This bill could use significant improvements (for example, it does not generate sufficient revenue) but it would create a system in which U.S. corporations would receive no tax advantage from shifting jobs or profits offshore.