In November of 2011, Citizens for Tax Justice released a report analyzing the federal income taxes paid by hundreds of profitable Fortune 500 corporations during the three-year period between 2008 and 2010. The report identified 78 companies that had managed to avoid paying any federal income tax in at least one year over this period. FedEx was one of these companies. The report also showed that over the three-year period as a whole, FedEx paid an effective tax rate of just 0.9 percent on nearly $4.3 billion of US profits. This brief extends our previous analysis to include fiscal years 2011 and 2012, and finds that the company’s tax rate for the five-year period remains quite low, at 4.2 percent. 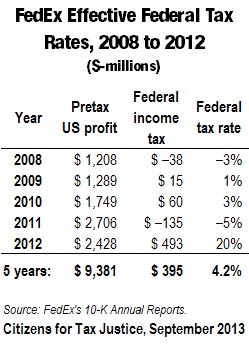 The annual reports filed by FedEx with the Securities and Exchange Commission make it possible to calculate the federal and foreign income tax rates paid by the company each year. The table at right shows our estimates of the US pretax income, current federal income tax and effective tax rate for FedEx in each of the past five years.

Our analysis shows that FedEx has been very successful in reducing its tax rate well below the statutory 35 percent federal income tax rate. In particular:

While it is difficult to know exactly which tax breaks the company claimed to achieve these low tax rates, a close analysis of the company’s annual reports suggests that accelerated depreciation tax breaks, which allow companies to write off the cost of capital investments su 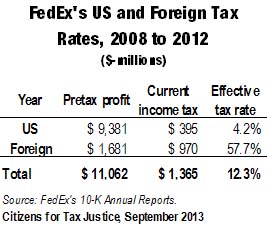 bstantially faster than they actually wear out, is the main reason for the company’s low taxes. Accelerated depreciation is a long-standing tax break that Congress has acted to expand substantially in the past decade.

FedEx also publishes estimates of the taxes it pays to foreign governments on its foreign pretax income. These data show that over the past five years, the company paid a much higher tax rate to other nations on its foreign income than it paid to the federal government on its US income.