Earlier today, presidential candidate Donald Trump outlined his plan to restructure personal and corporate income taxes. A new Citizens for Tax Justice analysis of the Trump plan shows that it would cut personal income taxes by nearly $12 trillion over the next decade. While the plan would cut taxes on all income groups, by far the biggest beneficiaries would be the very wealthy.

CTJ’s analysis shows that if fully implemented in tax year 2016, Trump’s tax proposals would likely reduce revenues by almost one trillion dollars a year. Every income group would see an income tax cut, on average, under Trump’s plan:

The best-off 1 percent would receive the biggest share of the income tax cuts under the Trump plan: fully 37 percent of the tax cuts would go to this small group of the wealthiest Americans. By contrast, the poorest 20 percent of Americans would see just 1 percent of the benefits from Trump’s tax cuts. 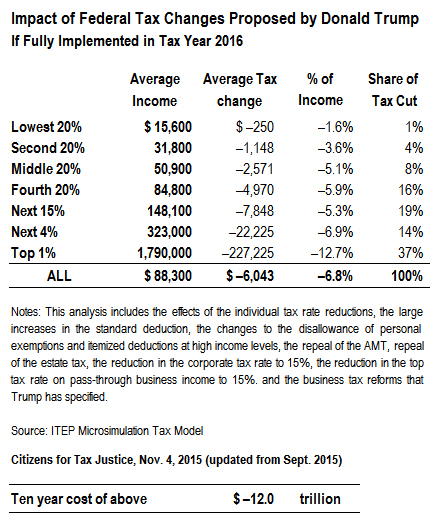 The plan’s tax cuts include:

*The revenue and distributional estimate have been updated to include the report has been updated to include the impact of reducing the top tax rate on pass-through income to 15 percent. The impact of this provision increased the total revenue income from $10.8 to $12 trillion and increased the tax break for those in the top quintiles substantially.