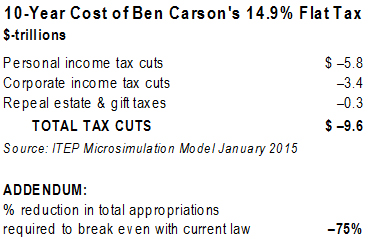 A Citizens for Tax Justice (CTJ) analysis of presidential candidate Ben Carson’s recently released flat tax plan finds that it would cost an estimated $9.6 trillion over 10 years. The candidate’s proposal would have to be paired with $9.6 trillion in spending cuts to avoid massive annual budget deficits, meaning it would require an implausible 75 percent cut to all discretionary spending over the same time period. Carson’s plan would provide the wealthiest one percent of taxpayers with trillions in additional tax cuts, while increasing taxes on families in the bottom half of the income distribution. 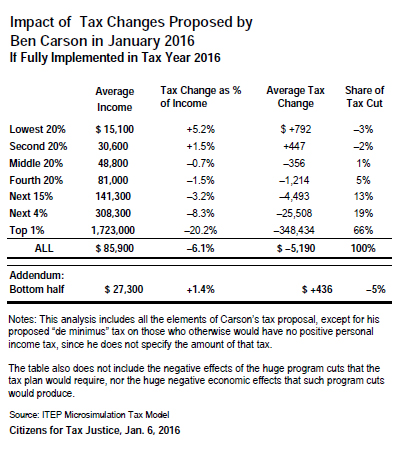 Two-thirds of Carson’s $9.6 trillion in proposed tax cuts, i.e., $6.3 trillion, would go to the top one percent of taxpayers. This highly skewed result reflects the plan’s extremely regressive features, including an enormous cut in top tax rates on personal and corporate income, the elimination of taxes on capital gains, interest and dividends, elimination of the estate and gift tax and immediate tax write offs for all corporate capital spending.

Because Carson’s plan preserves the Social Security and Medicare payroll taxes, the marginal tax rate on the wages of most Americans under Carson’s plan would be 30.2 percent (the sum of Carson’s 14.9 percent rate plus the 15.3 percent payroll tax rate*). The details of Carson’s plan diverge significantly from his campaign rhetoric, which promised to replace the entire tax system with a flat income tax rate of between 10 and 15 percent. As Carson put it during a televised debate “you make $10 billion, you pay a billion. You make $10, you pay one.” A rough estimate from CTJ found that a 10 percent tax rate would cut total federal revenue in half and a 15 percent rate would cut revenue by a third. Given this fiscal reality, it is not surprising to see that Carson ultimately decided to keep Social Security and Medicare payroll taxes, which will provide about $13 trillion in revenue over the upcoming decade. But Carson’s description of his new tax plan implies, misleadingly, that the payroll tax would no longer exist going forward under his plan.

• Creates a single income tax rate of 14.9 percent, with an exemption for the first $36,375 for a family of four, and varying amounts for other family sizes.

• Requires some unspecified (and thus was not modeled in our analysis) minimum tax payment from low-income families that would otherwise owe no income tax.

• Eliminates all other deductions, exemptions and credits in the personal and corporate income tax.

• Eliminates the taxation of capital gains, dividends and interest income.

* The Social Security and Medicare payroll taxes are 15.3%, half paid by workers and half ostensibly paid by employers. Self-employed people pay the full 15.3% rate, since they have no employer. Economists generally agree  that the nominally employer-side of the tax is actually passed through to workers (in the form of reduced pay).