As in previous years, House Budget Committee Chairman Paul Ryan has released a budget proposal that includes some specific, enormous tax cuts with a vague promise that the amount of revenue collected by the federal government would somehow be unchanged. There is no way the plan could be implemented without providing millionaires with tax cuts averaging at least $200,000.

The language in Ryan’s budget plan makes clear that he expects Congress to limit or eliminate tax expenditures (special breaks or loopholes in the tax code) in order to offset the cost of his proposed tax cuts, which include reducing personal income tax rates to 25 and 10 percent, repealing the Alternative Minimum Tax (AMT) and reducing the corporate income tax rate to 25 percent, among other tax cuts. 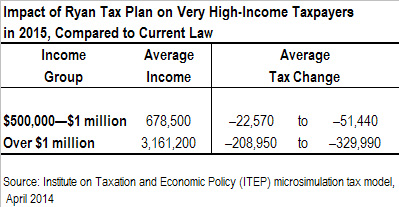 For taxpayers with income exceeding $1 million, the benefit of Ryan’s tax rate reductions and other proposed tax cuts would far exceed the loss of any tax expenditures. In fact, under Ryan’s plan taxpayers with income exceeding $1 million in 2015 would receive an average net tax decrease of over $200,000 that year even if they had to give up all of their tax expenditures. These taxpayers would see an even larger net tax decrease if Congress failed to limit or eliminate enough tax expenditures to offset the costs of the proposed tax cuts.

Estimates produced using the Institute on Taxation and Economic Policy (ITEP) microsimulation tax model illustrate two scenarios for how the Ryan budget plan could be implemented. In the first scenario, very high-income people must give up all of their tax expenditures, except for those subsidizing investment and savings which Ryan has consistently made clear he would preserve. Even in this scenario, these very wealthy people would receive enormous net tax cuts, as illustrated in the table above. In the second scenario, these very high-income people are not required to give up any tax expenditures, and as a result their net tax cuts would be even larger.[1]

Because these very high-income taxpayers would pay less than they do today in either scenario, the average net impact of Ryan’s plan on some taxpayers at lower income levels would necessarily be a tax increase in order to fulfill Ryan’s goal of collecting the same amount of revenue as expected under current law.

Chairman Ryan’s budget plan lays out (on page 83) the following “solutions” for our tax system:

• Simplify the tax code to make it fairer to American families and businesses.

• Reduce the amount of time and resources necessary to comply with tax laws.

• Substantially lower tax rates for individuals, with a goal of achieving a top individual rate

• Transition the tax code to a more competitive system of international taxation [apparently similar to the international proposal by House Ways and Means Chairman Dave Camp].

Elsewhere the plan makes it clear that the Affordable Health Care for America Act (President Obama’s major health care reform) would be repealed. This means the plan would repeal tax increases that were part of the health reform law, including a significant provision reforming the Medicare Hospital Insurance (HI) tax so that it has a higher rate for high-income earners and no longer exempts the investment income of wealthy taxpayers.